A ‘Niu’ Perspective on Ethan Niu 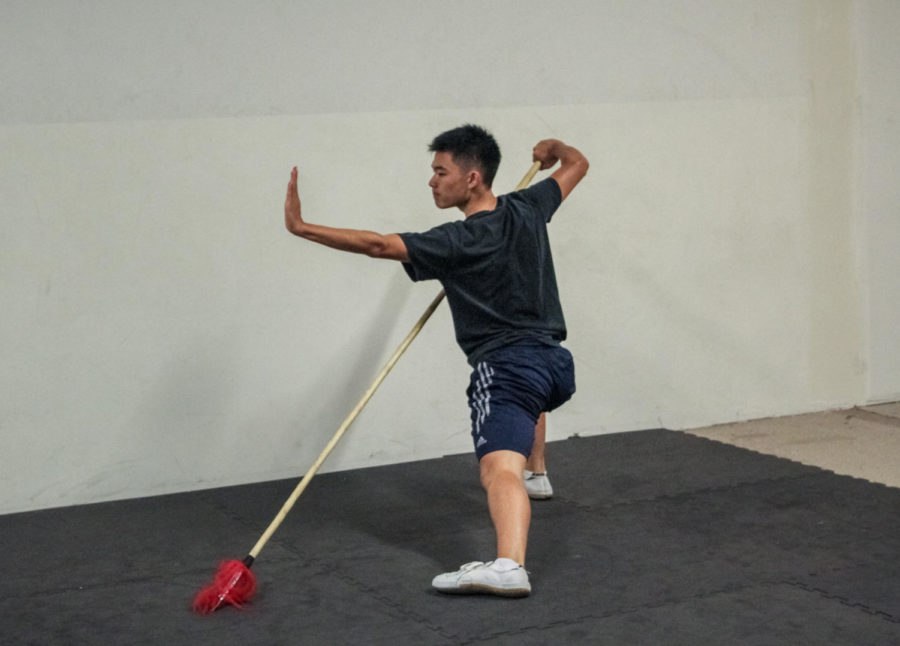 Ethan Niu trains with a spear during his routine for wushu competitions.

Holding a spear in his hands, he slices through the air before gracefully leaping to the other side of the room. After school, sophomore Ethan Niu can usually be found practicing a variety of stances and acrobatic movements, which are all aspects of wushu. He has been practicing wushu for nine years of his life and is a member of the Niu Academy competition team as well as the national team for traditional wushu.

When asked how he got into wushu, Ethan Niu said, “because [of] my dad. My dad used to be one of the judges for the U.S. team, and I aim to be better than him.”

Ethan Niu trains at Niu Wushu & Kung Fu Academy, which is owned and run by his father and coach Adrian Niu. He attends classes four days a week and assists in teaching a class on Wednesdays and Saturdays. His competition team will travel to San Francisco, Los Angeles, San Jose and U.C. Berkley this year to compete.

Wushu-form competitions require the competitors to perform with assorted weapons such as spears and swords in an assigned amount of time. At competitions, Ethan Niu performs a minute-long routine with his spear.

When asked about Ethan’s biggest strength, Adrian Niu said, “[Ethan] picks up details pretty fast. For other students I have to say things a million times, and for him, maybe I say it a couple times, and he gets it.”

Ethan Niu’s ability to quickly understand concepts, as well as his overall athletic ability, makes him a great wushu student. Despite his proficiency in wushu, he still has had to overcome challenges in order to improve his skills.

“So in wushu we have this thing — it’s like a wall for all of the students. We’re gonna hit that wall once in awhile, sometimes twice or three times, but it’s a time where your abilities can’t go up,” Ethan Niu said. “Me, for example, when I was in middle school and elementary school, I hit that wall a few times. I couldn’t improve. But you just have to persevere and then keep going.”

Although Ethan Niu has had to face many difficulties, his friends, teammates and family have helped him and supported him throughout his training.

“The bonding in the team [is the best part], because there’s an atmosphere of competition. Everyone works the hardest to achieve their goals. Wushu has impacted my life in various ways. It’s helped me open up to people and also help me make new friends,” Ethan Niu said.