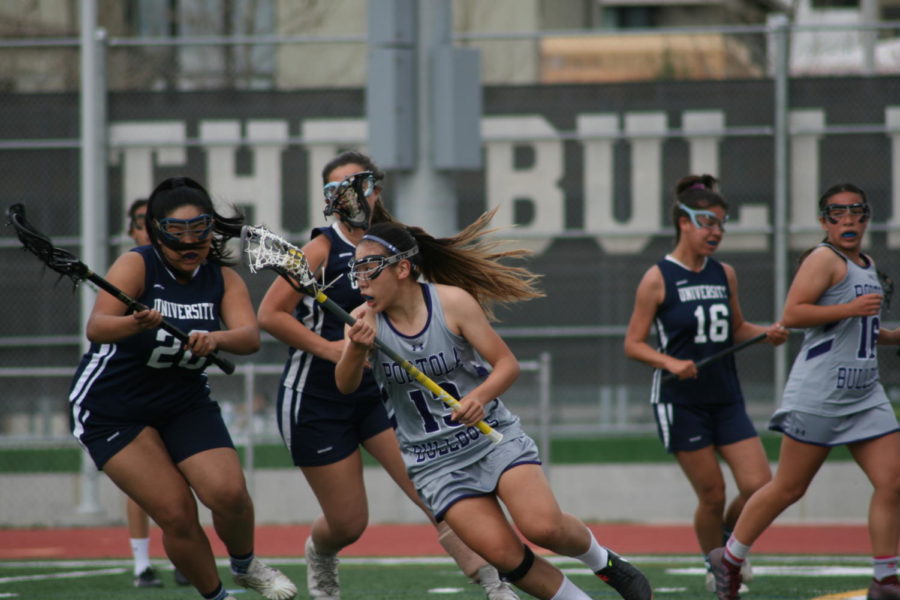 Intensely guarded by University High players, forward and freshman Christine Chang does a stunning turn to get past the defense to try and shoot in the top right corner of the goal during quarter one.

Girls’ lacrosse (0-2) lost 1-18 against head coach Phoebe Solomon’s alma mater, University High, on March 20 in the stadium. It was the Bulldog’s first game of the season against one of the strongest lacrosse teams in the district.

“When I played there in my freshman year, it resembled more of what this team does now,” Solomon said. “We would lose every game. We would get mercies and stuff like that, and by the time I was a senior, it resembled more of what we saw on the field when we played against them, so that was an interesting evolution. It was also kind of hopeful for me knowing that a program can end up like that in just a matter of years.”

The game started off rough with the Trojans scoring in the first minute. As the Bulldog defense recovered, forward freshman Christine Chang and midfielder sophomore Rachel Yang earned several penalty shots with the opposing player getting a yellow card. Unfortunately, University High scored nine more points in multiple counterattacks, ending the first half 0-10.

During the halftime break, Trojan players were laughing as the game was a sure win. Despite the poor sportsmanship of the other team, the Bulldogs listened to the coach’s encouragement to focus and play stronger no matter what the scoreboard read.

“It’s a team sport; it’s not an individual sport,” co-captain and sophomore Madison Vo said. “You need to get all your teammates and players together to work as one whole.”

At the start of the second half, sophomore Peyton Weidner won her team’s first draw, the start of a new play. After a crossing pass from Chang, freshman Celine Aoki scored the first goal in the 17th minute to the cheer of the bleachers.

“Scoring the first goal felt very rewarding because we’ve been working on it for a while, and all the hard work paid off,” Aoki said.

University High ran up the score another eight points, and the game ended with a score of 1-18.

“I would love for this program to grow into one of the more competitive programs in Orange County and eventually Southern California,” Solomon said. “Obviously, we’re not there yet, and we are still very focused on fundamentals, but there is a great deal of potential.”