Helping the Homeless is Curing California 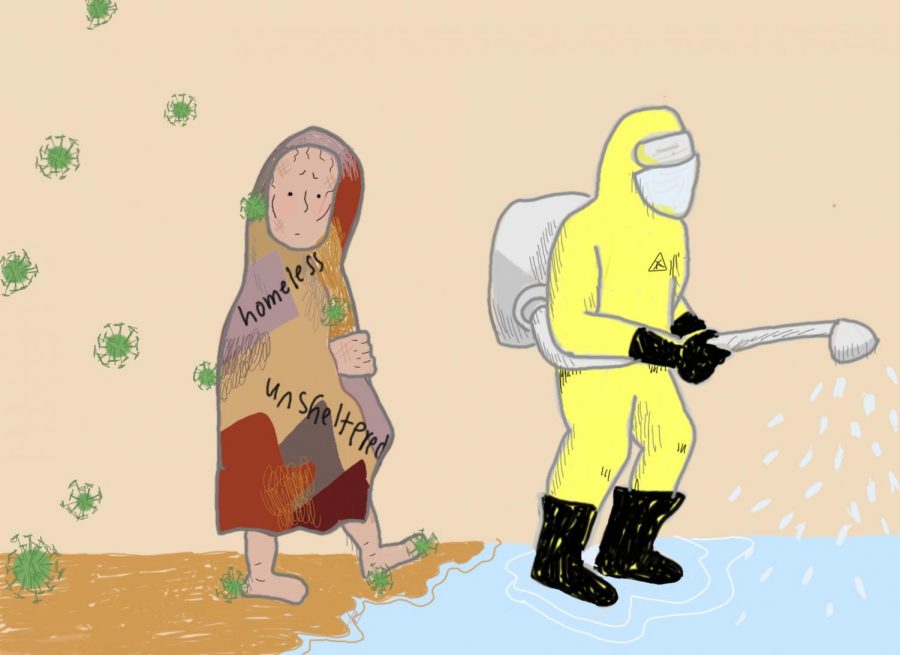 The homeless are cold, unbathed and also more susceptible to Coronavirus, as they do not have facilities to keep themselves hygienic. Their unsanitary conditions and already deficient health status increase the risk of these individuals contracting the virus, which also poses a threat to the public.

Just minutes away from Irvine, hundreds of individuals are unsheltered and on the streets. As of March and April of 2020, on top of their usual concerns of finding food and a place to sleep, the homeless have one more thing to worry about: Coronavirus.

It has become necessary for the state to provide protection for these residents of the streets in order to prevent further harm to California.

Although not many homeless shelters are in Irvine, the problem is not as far away as it seems. The population of homeless individuals in Orange County is estimated to be 10,000, according to Paul Leon, a former county public health nurse and co-founder and director of Illumination Foundation.

According to Kira Newman, an infectious disease researcher at the University of Washington, homeless individuals are more likely to contract COVID-19 and less likely to be able to recover.

“Sanitizing surfaces and maintaining a distance between people are key to containing it. These precautions are not always practical for homeless individuals,” Newman said in an interview with USA Today. “They also have a high rate of poorly treated chronic illnesses, putting them at a greater risk of a severe COVID-19 infection. Once people without homes get sick, they may lack the proper care required to get better.”

“The shelters present a greater risk of transmission because you have people interacting and sleeping in close quarters,” Marr said in an interview with the New York Times.

As of April 17, California acquired more than 15,000 hotel rooms for homeless individuals in attempts to combat this issue but fell short of the 100,000 people on the state’s streets, according to the New York Times.

Other counties, including Laguna Hills, have argued against this, as they are concerned the transfer process of more than 70 homeless individuals will pose a direct threat to surrounding communities and the high senior population within the county. In an interview with the OC Register, Kelly Richardson, an attorney representing the city and building owners, said the unsheltered and their use of public hospitals for testing and facilities increases the potential of local residents being infected by the virus when sharing the same locations.

However, putting the unsheltered population in regulated, monitored areas helps the state manage the situation and prevent further cases. Fox News reported on April 19 that there were 30 Coronavirus cases among homeless individuals in Los Angeles, while San Francisco had over 100. The most recent reporting stated there were 43 additional cases at a homeless shelter in Los Angeles on April 21, according to ABC7.

Temporary hygiene centers that are sanitized regularly could be set up to provide locations for the homeless to tidy up and be tested, masks and sanitizers could be distributed, and shelters could be more heavily regulated.

Students can also donate masks or sanitizers to their local shelters through mail or a drop-off. The elephant in the room cannot be ignored further, in order to protect residents on and off the streets.