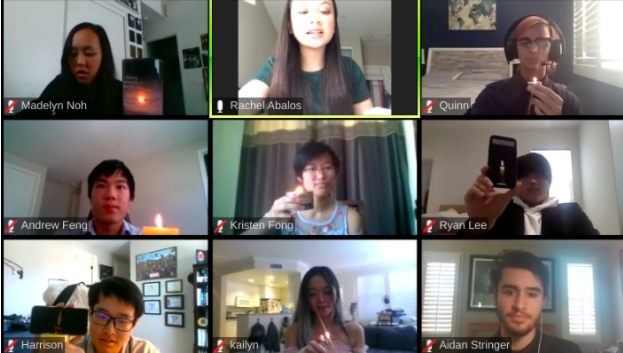 Nine students were inducted into the International Thespian Society on May 20 for their commitment to performing arts. Despite the event being held on Zoom, the traditional ceremony of lighting a candle for inducted members when their name is called was preserved.

ITS is a group of passionate visual and performing arts members who dedicate their time to theater arts through show production, musical performances and other acting roles. Members must accrue at least 100 hours, or 10 points in the ITS system, prior to induction.

“I wanted to join because performing arts is my passion, and it seemed like another step to get involved while also allowing myself to celebrate my accomplishments,” Pham said. “The biggest way they help celebrate our achievements is through the induction process, which we did over Zoom, and they call out our names, our points and what programs we are a part of. It really reminds us of how much work we put in.”

In addition to inducting new members, adviser Samantha Sanford recognized certain members based on the number of points they attained, their GPAs and their contributions to the program by grade and role. Individuals are awarded points based on the roles they have played as well as the number of hours spent outside of class working on their craft.

After the induction process, Sanford surprised senior ITS members with video messages from principal John Pehrson and multiple visual and performing arts teachers including Megan Kirby, Jeanne Jelnick and Samantha Gardner to commend and send them off.

“We had special guests that were near and dear to the theater department’s heart. They sent in videos to wish our seniors well and talk about the growth of the theater department over the last four years, especially since this is the last hurrah for our seniors who are graduating and moving on,” Sanford said. “It was very sweet, and I’m very grateful that everyone was able to contribute and film these special videos.”

Portola’s thespians plan to release a new YouTube channel next week to describe the program and display their talents, while continuing their passion despite isolation from one another in quarantine.