Leaving Home for Nonessential Reasons Will Lead to Preventable Danger 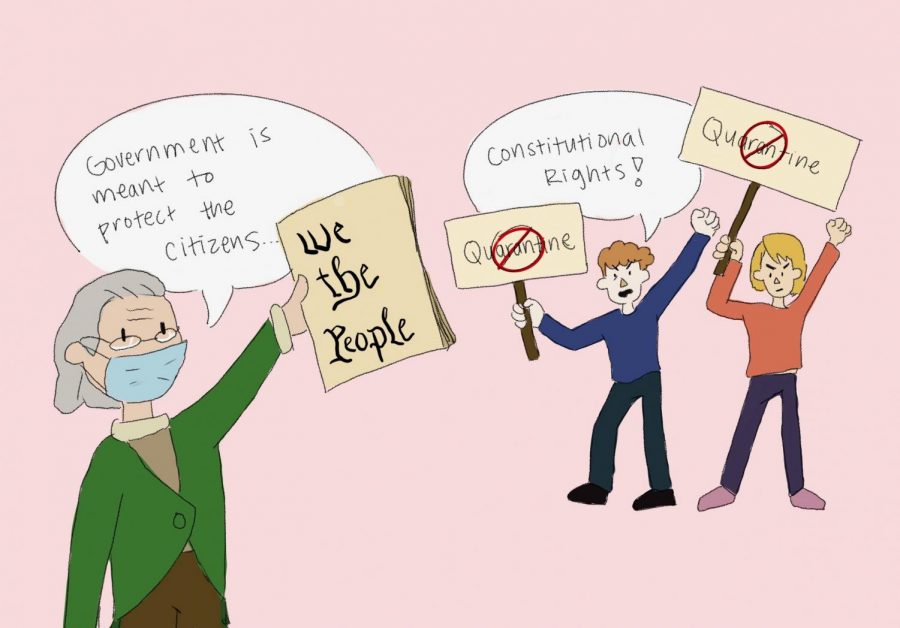 Although the American government is based in individual freedom, people must give up some of their freedom in order to deal with crises such as COVID-19.

With California’s COVID-19 stay-at-home order entering its fifth week, citizens are fighting back, flocking to beaches and holding protests that violate physical distancing policies. Californians should adhere to the stay-at-home order, keeping everyone safe instead of selfishly going out into crowded areas.

Over 200 protestors gathered at Huntington Beach on April 17 in a “March for Freedom.” On April 21, Orange County supervisors voted to keep beaches and parks open, according to the LA Times. This weekend, thousands of people congregated at Huntington and Newport beaches due to the first spring heat wave of 2020, according to Business Insider.

Consequently, Orange County saw its biggest two-day increase in confirmed COVID-19 cases so far over the weekend, according to the LA Times.

“As a citizen, I decide not to participate in them [the protests],” social studies department chair Jon Resendez said. “I care very much about public health, most of all the health of my family, and I wouldn’t want to put them in danger by being around folks that may have it [COVID-19].”

Opponents of state-mandated quarantines argue that these policies infringe on their constitutional rights.

However, quarantines and the practice of temporarily suspending civil liberties have been used throughout American history. Continued outbreaks of yellow fever led Congress to pass federal quarantine legislation in 1878, and the quarantine system was fully nationalized by 1921, according to the Centers for Disease Control.

Although many claim the right to assemble or protest during quarantine as a first amendment right, their actions clearly put others at risk.

The Supreme Court case Schenck v. United States (9-0) established that in times of clear and present danger, the government can infringe upon your first amendment rights. Thus, both federal law and judicial precedent prove that state-enforced quarantines are well within their legal boundaries.

“I would like to see people be more logical about their actions and a little bit less emotional,” Resendez said. “Reason and morality can converge, and you can come to the reasonable conclusion that it’s the right thing to do to stay home, to choose other means of expressing yourself.”

Currently, media coverage and societal pressures have done a relatively effective job of encouraging people to stay home, as shown by decreased public gatherings and lower rates of traffic in Southern California, according to the OC Register.

However, if beach outings continue to increase in size and frequency as temperatures rise, the local and state governments should close the sands and barricade beaches, striving to discourage as many people as possible from congregating.

Instead of public protests, people can practice their civil liberties through methods like raising awareness through media, calling their local representatives and signing digital petitions, eliminating health risks while still voicing their beliefs.

Ultimately, we should see ourselves as humans before Americans. When individuals begin to trade empathy and reason for the sake of protesting against the government, we as a nation will set off on a dangerous path.

Holding ourselves to any sort of moral standard is especially important now that daily life has been upended, and people who want to express their political opinions should practice their civil liberties digitally rather than needlessly putting their lives in danger.