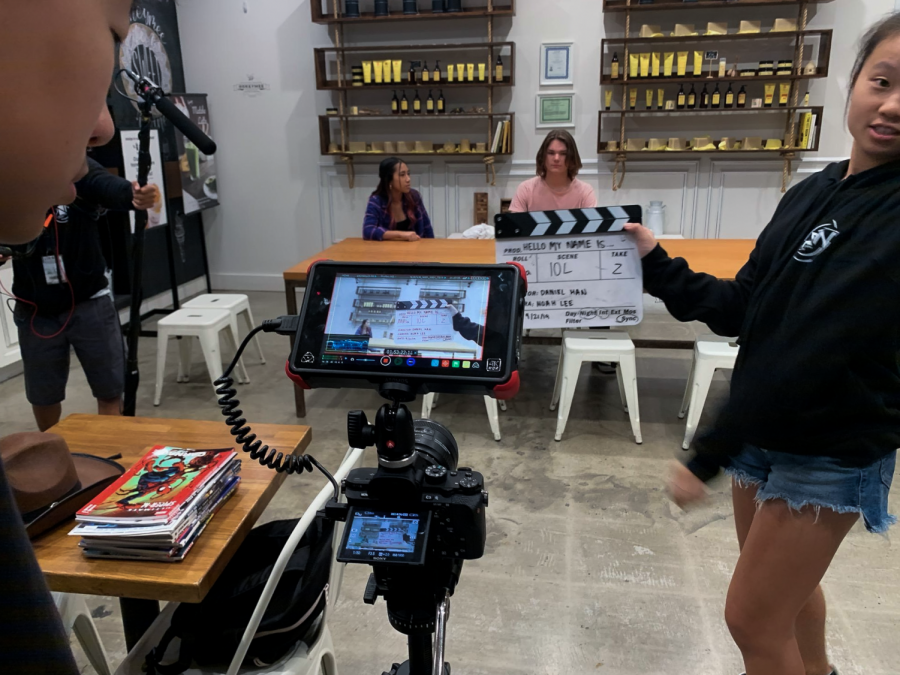 Producer and junior Skye Lee positions the clapperboard in front of the camera to designate the scene on the set of the short film, “Hello My Name Is.” “Hello My Name Is” is one of many entries from students being submitted to Orange County Film Festival this year.

If you’ve seen several students scrambling to film, assemble and edit, they are most likely on a mission to submit their entry for the Orange County Film Festival (OCFF) before the Dec.16 deadline.

OCFF, one of Southern California’s most prominent film festivals, is sponsored by FilmEd Academy of the Arts, which gives students an opportunity to experience the film industry while providing access to filmmaking technology.

Portola is submitting 25 entries to OCFF this year. Tasked with keeping students on track to finish their projects is OCFF manager and junior Peter Pan.

“A lot of groups like to do final touch-ups even on the due date,” Pan said, “Last year, I remember a lot of groups were still on their computer finishing up final touches, and the representative from the film festival was on campus to pick up a physical hard drive so we can submit our final draft.”

This year, Portola News Network (PNN) is submitting its broadcast as a festival entry, with all students in the class working on a separate entry. PNN students are allowed to use any material that they have already used in the broadcast and material they shoot on the side, on the weekends or extracurricular hours. Video production teacher Tina Murphy believes the experience inspires students to pursue careers in film, TV, and broadcast.

“They get together and figure out a story, think of good characters, decide on a plot and take a character on a journey that has conflict and highs and lows that the audience would want to follow,” video production teacher Tina Murphy said. “When done right, pre-production can save a lot of production time.”

Senior Daniel Han is one student submitting a narrative short film entry to OCFF this year titled, “Hello, My Name Is.”

The short film chronicles the story of a character who loses confidence but comes to realize that he has to stop trying to be someone else and needs to find his own path. Han cites the Broadway musical “Dear Evan Hansen” and the film “Catch Me If You Can” as inspirations for his project.

To Han, the logistics behind the project are the most difficult part of filming. Actors from Orange County School of the Arts (OCSA) and Portola High are used in the film, which was shot during the school year.

“We’ve come this far about writing a piece we’re this passionate about and writing to tell a sort of message to the viewers on what we want the world to know,” Han said. “The fact that me and the two other guys that I’m working with were all passionate about this one idea is memorable to me.”

The winners will be announced on Feb. 15.