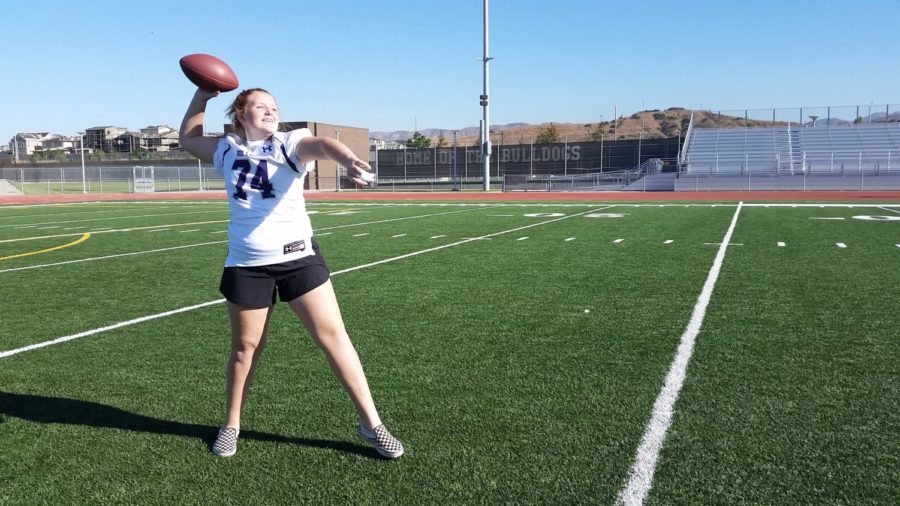 McMurray showcases her abilities while throwing the ball during practice.

When the whistle blows, she sprints forward across turf and tackles her teammate, only to release when the next whistle sounds. Freshman Lauren McMurray is the first girl to join the football team.

“During the football unit [in middle school], I found out that I could actually play football and that I was really good,” McMurray said. “I was asking all my friends what they would think if I played football during high school, and they all said that would be really cool.”

McMurray plays defense, specifically nose tackle (positioned opposite the center) and end (on end of scrimmage line). She said she hopes to play offense, possibly guard or center, next year. She also participated in different sports before joining football in the fall season.

“My hobby is now football, but I used to do archery,” McMurray said. “I used to also do swim, but I don’t really do anything that much now because football takes up my time.”

The prospect of having a female on the football team was new to the school when McMurray started out.

“In the beginning some people did question like ‘How am I supposed to [tackle] her?’” McMurray said. “But I’m just like, ‘Hit me like you would hit anyone else,’ and they are all just super nice, and they don’t really treat me differently.”

Football requires strength and stamina, which females are stereotyped for lacking. However, it seems the football team has pushed past this societal gender discrimination by accepting McMurray as part of the team.

“I’m just proud of the fact that we built a team culture and program culture that was accepting, and basically it was, you do X,Y and Z and you’re in,” head coach Peter Abe said. “She’s already proven that she works as hard as everyone else and pulls her own weight and does all the hit and drills, comes to all the meetings and practices. We treat her as we would any other football player.”

McMurray focuses on the change that she aspires to create as the first female football player. She does this by inspiring other girls to progress beyond gender bias and social stigmas and pursue their goals and dreams.

“I wanted to make a difference about what people thought of girls because a lot of people think that girls can’t do anything athletic,” McMurray said. “I was trying to change people’s opinions.”

McMurray will be in offseason for the winter season and is considering starting softball in the spring. She also plans on playing football all four years of high school.