Riding into Spring at the Mario Kart Pep Rally 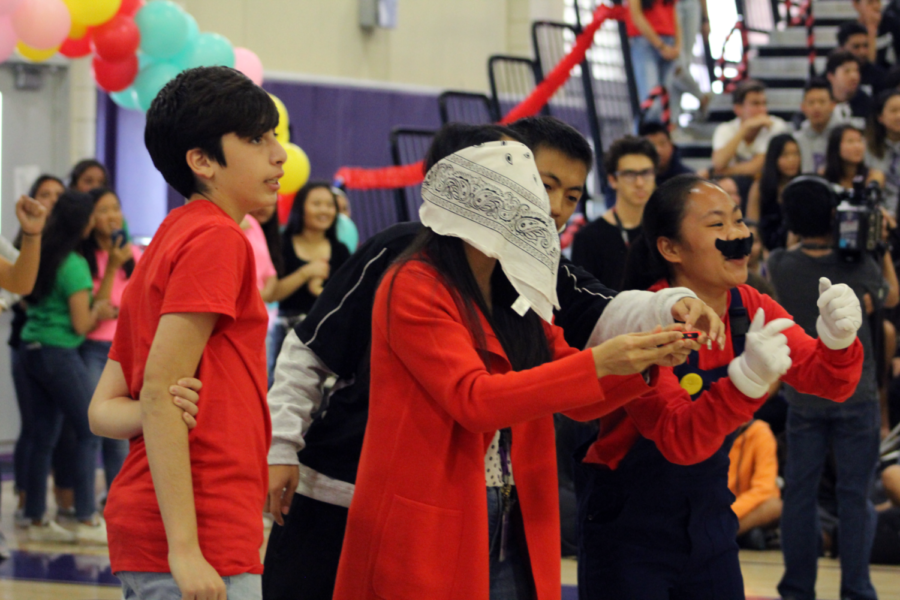 History teacher Katie Wi competes for the Orion house in a game of Mario Kart on the Nintendo Switch. As she was blindfolded, Orion house vice president and sophomore Allyson Tabayoyong gave her instructions on where to go.

Students filed into the gym as Mario Kart music blasted over speakers for the themed spring pep rally on March 8. The ASB-planned pep rally highlighted spring sports and featured performances from Jazz Band, dance and cheer.

After Jazz Band’s performance of the “Star-Spangled Banner,” ASB members dressed as Mario Kart characters entered the floor to act out a classic Mario scene where Bowser kidnaps Princess Peach, leading Mario to try and save her. The skit was followed by the first-ever Dance Company and Dance 3’s joint performance choreographed by David Slaney.

“The pep rally was a really unique experience compared to past pep rallies as there was an interesting theme,” sophomore Shideh Moayed said. “I really enjoyed watching [the skit] as I am familiar with Mario Kart. The performances throughout were also some of the most engaging ones I have seen for a pep rally.”

Following the performances, students who found gold coins under their seats descended to the gym floor to play a game of Mario Kart, representing their respective houses. ASB presented a twist to the game as the players were all blindfolded while team members shouted where to turn in the game. Hercules won, gaining ten points and tying them in second place for the House Cup with Poseidon.

“I think [the highlight] was Mario Kart. Everyone was very hyped for that, and everyone was chanting,” co-spirit rally commissioner and junior Madelyn Noh said. “I think that was the best student involvement we have had.”

A Cheer performance to the song “Pep-Rally” by Missy Elliot followed the Mario Kart game, and later ASB showed a video where students played Truth or Dare while quickly rearranging the stage to make room for each spring sport team to run out onto the gym floor to a select song.

The rally progressed smoothly though there were several pauses in the momentum with various technical difficulties, such as when ASB was trying to set up the Mario Kart game or trying to project the house points, which left students waiting in their seats.

“I think it was definitely an improvement from the last rally,” co-spirit rally commissioner and junior Jeffrey Chen said. “We had a lot more decorations, and we had a lot more student involvement even though things may have not necessarily gone the way we wanted it to go. I felt that the students were still engaged and still enjoyed the difficulties we faced as they laughed through it with us.”