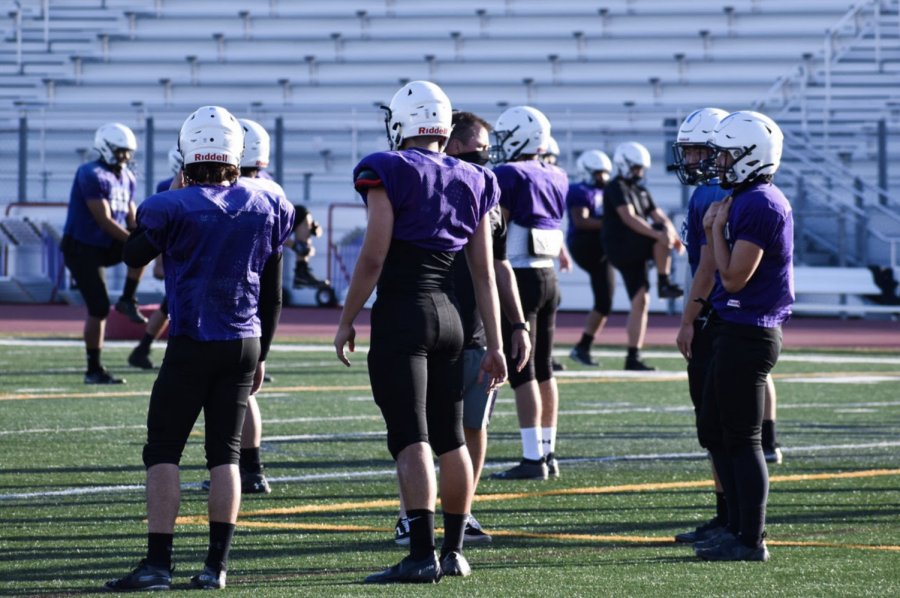 Football takes a break from their warm-up during a practice Feb. 26 in preparation for their shortened spring season, which will run from March 12 to April 16. For viewers, four weeks of freshman, junior varsity and varsity football games up to April 8 are currently scheduled to be broadcast over the National Federation of State High School Associations’ online network.

With the rate of new COVID-19 cases dropping below 14 per 100,000 across Orange County, the California Interscholastic Federation announced March 3 that outdoor athletic programs for cheerleading, football, water polo, baseball, lacrosse and softball could return to competition, joining swim, track and field, cross country, tennis and golf. Additionally, on March 4, the state of California permitted indoor cheerleading, volleyball, basketball and wrestling to return to competition under stricter collegiate guidelines.

Athletes’ return to play is not without its restrictions. Students are still required to wear masks during indoor and outdoor practice and competitions, unless masks become a health issue, especially in sports like swim where it may be a choking hazard. For these sports in particular, athletes must don masks immediately following the competition, according to athletics director Peter Abe.

Additionally, all students who compete in contact sports are slated to undergo weekly COVID-19 testing on Mondays from 10-12 a.m. and Fridays from 1:15-3:30 p.m. Football and water polo began testing in mid-February, and the Friday testing period was opened March 11 in light of three indoor sports — volleyball, basketball, and wrestling — also requiring testing to compete.

To ensure that every game is upholding COVID-19 safety precautions, spectators are limited. When Portola High hosts the sports event, select spectators are permitted, but away visitors are only allowed for stadium sports such as football, according to Abe.

With these new guidelines in place, the athletics department will ease into the spring season. While girls’ water polo held its first game against Northwood High on March 4 and varsity football’s first game kicked off against University High March 12, some programs, such as basketball, have yet to begin competitive play.

“We’re all pretty excited. We’ve been waiting for this, and there’s been so much uncertainty around it, but at the same time I’m a little scared of all the risks that are still going around,” basketball player and sophomore Maya Toorani said.

The district, athletics department and school administration are also planning to create opportunities for spectators to view sporting events without attending them in-person, according to Abe. The first varsity football game of the season on March 12, for instance, was streamed virtually for viewers to tune in from the comfort of their own homes, and other sports may follow.

“It’s all coming together, just one day at a time, slowly but surely,” Abe said.