Swaying to the Choreography Showcase 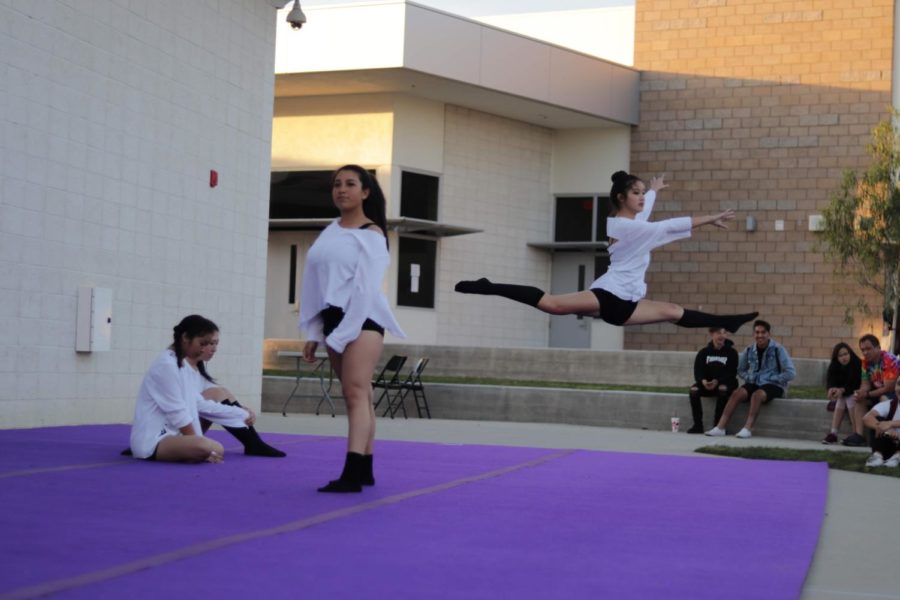 Sophomore Alene Hata opens up the dance with a leap as Jaylin Moreno stands from her opening pose.

The choreography showcase featured students from Dance 1 and 2 in groups ranging from four to eight people to create dance routines they performed May 18 in the outdoor amphitheatre. The showcase was a fun experience for friends and family to see students perform new dance routines that have not been seen this year.

The choreography unit is the one time during the year for all dance classes to express creativity in their own student-choreographed routines. While other units were taught by visual and performing arts and physical education teacher Samantha Gardner, this unit combined the abilities of different students to create a work of their own by coming up with their own routines to perform.

“I helped my group by editing the transitioning for the music,” Dance 1 student and freshman Tiffany Lugo said. “We all contributed our own ideas and our own moves into the dance.”

Students were encouraged to come up with their own themes for their routines, creating storylines for the audience to follow along with. Some themes have been used in a way for dancers to express who they are with the use of music and dance style.

“I liked how we got to express our own style and show what we really liked,” Dance 2 student and sophomore Trisha Andrews said.

All of the groups had to come up with a name to represent their choreography style. While some routines were slower and more emotional, others were more upbeat.

“I’m performing a hip-hop dance called ‘:(:’ and our theme is light and the dark,” Dance 1 student and freshman Kayla Cantor said.

The first dance out of 24 for the night was performed by the dancers in Halo Club, which raises money and awareness for autism. Although the majority of the dance groups that performed were assigned by Gardner, there were also some special acts that performed, such as students who were not in dance classes. One familiar performance was Dance Company’s end-of-year pep rally routine.

While some dance routines focused on one song in the background, other routines had a medley of familiar songs for their dance. Many students who were supporting their friends in the audience were dancing and singing along to popular lyrics blasting through the speakers.

“I think my favorite part is seeing the students get out of their comfort zone a little bit, branch out, make new friends, meet new people and overall just grow as choreographers,” Gardner said.