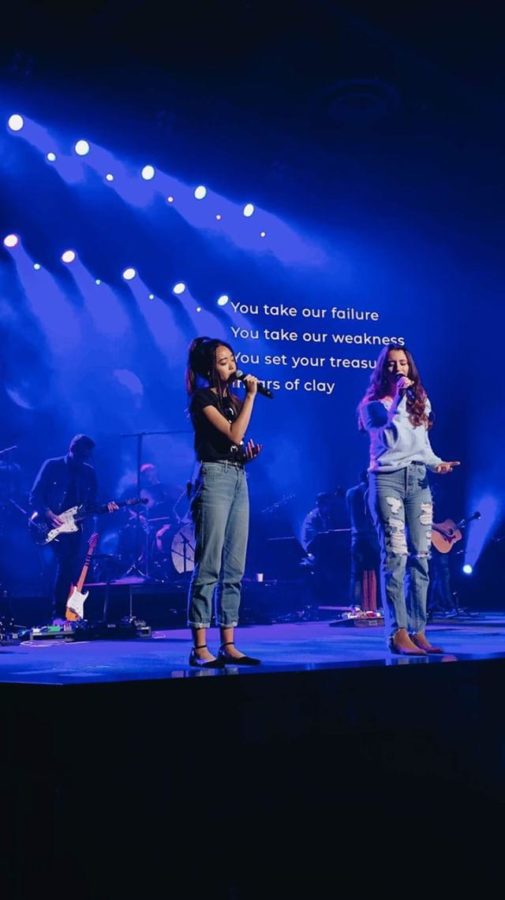 Sophomore Kailyn Pham (left) sings powerfully during one of the Mariner Youth Culture Band’s performances. Pham has been working effortlessly in order to use her music prowess to help better impact her surrounding community.

Sweet but powerful voices fill the stage with uplifting gospel songs as sophomore Kailyn Pham performed in the Mariners Youth Culture Band, a group she has been a part of for almost a year. While Pham performs, fellow sophomore Natalie Ng moves around at the performance, taking videos and pictures to help boost the group’s media presence.

Having sung since fourth grade, Pham has brought years of experience to her role in Mariners. However, performing with Mariners has brought many new challenges and opportunities for growth.

“Before I started Mariners, I had barely sung alone ever. I knew it was a way to grow in my art and become more confident in my music, and it was also a way to use my passion for something bigger than myself,” Pham said. “A lot of the time, as a musician, it’s easy to get caught up in trying to be the best, but when I do things for my church band it really makes me realize it’s ok if I’m not the best at it because it’s what I love to do.”

While Pham has worked to use her musical talent to get more involved in her religious community, others within the church’s group have found alternative ways to use their gifts. Ng is also a member of the Mariners Youth Culture and works on the media team.

“I received so much from my church and my religion, and I wanted to give back,” Ng said. “Serving in a team that also incorporated some of my passions seemed like the perfect opportunity, so I took it.”

The two show how religion has found ways to appeal to more people in modern times by using efforts that deviate from the standard and stereotypical ways churches used to operate. By using music and media, the team hopes to bring more attention to their religion, the community, and inspire more people to get involved in a similar way..

“I think the band allows people to adequately express themselves. Lots of people respond to music, so I think it’s important that we incorporate that because it means so much to so many different people,” Ng said.