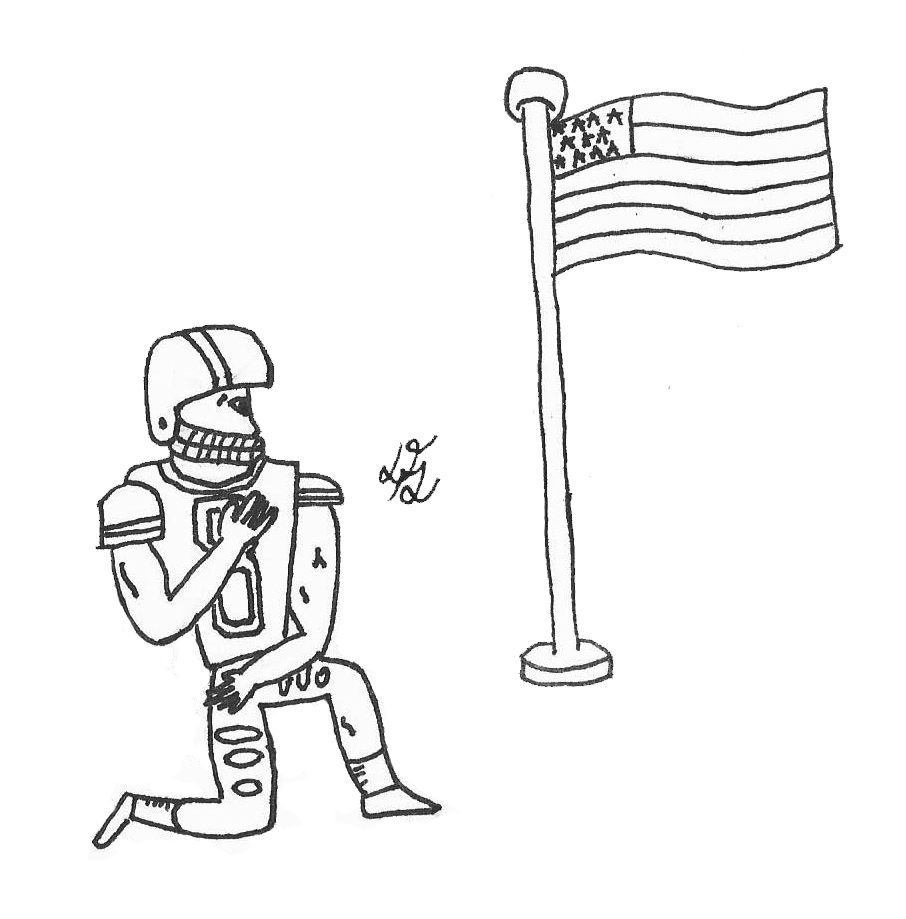 Is it Appropriate to Kneel During the National Anthem?

The movement has recently escalated during the 2017 NFL season with over 180 players taking the knee during week three of the NFL season, according to CBS Sports. Many people have spoken out against the movement, including President Donald Trump. However, it is completely justified for players to kneel during the national anthem because of the injustice in our country.

“I’m not going to stand up to show pride in a flag for a country that oppresses black people and people of color,” Kaepernick said in an interview with the NFL’s reporter, Steve Wyche, referring to cases of police brutality that appear in the news.

Interestingly enough, the Guardian states, “People who are African-American/Black are twice as likely to be killed by a police officer while being unarmed compared to a Caucasian/White individual.”

There are many people who think that the players are disrespecting the country by kneeling.

Although this is a valid counterargument to Kaepernick’s decision to protest police brutality, it does not address the issue Kaepernick is fighting for. By kneeling during the national anthem, the players are not protesting the flag; instead, they are protesting police brutality. The players are unable to support the United States at this time because of racism expressed toward African-American males by law enforcement.

A recent statistic found by Vox Media, an American news website, says that “42% of African-American/Black individuals who were killed by police during their arrest were not attacking when they were killed.”

This statistic expresses the severity of police brutality in America.

The decision to kneel for the national anthem is understandable considering the recent cases and statistics of police brutality in the United States. The players are not protesting the flag of the United States. They are just unable to support a country that continues to promote racist ideals. NFL players should have the choice to stand or sit for the national anthem. The players are doing nothing wrong, they are peacefully protesting, and the constitution prevents anyone from stopping them.

It started in the National Football League (NFL) and rapidly spread to other sports. Kneeling for the national anthem to protest social injustice has stolen the national spotlight, but is it still ethical and necessary after four months of constant repetition and attention? Kneeling is no longer imperative to the advancement of the movement and is counterproductively diluting the initial message in a form that is too controversial to effect change.

One of the first to kneel was NFL quarterback Colin Kaepernick, who originally kneeled to protest police brutality against African-Americans. The initial response to his motion was mixed, but relatively mild. However, as more players and teams are adopting the movement, its significance has rapidly shifted from a rallying call to support Black Lives Matter (BLM) to a way to guarantee a spot in news headlines.

There is no doubt that BLM has not yet achieved its formidable goal, but over time the focus on the protests has shifted from the subject of protest to the actual form of protest. The United States is known for being a highly militarized and patriotic country, and that fervor and passion for our flag often leads to a disregard for opinions that can be construed as disrespectful.

Former U.S. president Barack Obama said at the 2016 G20 Summit, “As a general matter, when it comes to the flag, the national anthem and the meaning that holds for our men and women in uniform and those who’ve fought for us — that is a tough thing for them to get past to then hear what [Kaepernick’s] deeper concerns are.”

As a result, no protest, regardless of how crucial it is, will ever be fully received in our country because of how sacred the flag and its anthem is. Rather, it is disadvantageous to do so because it takes away from the progression of the cause even if it is peaceful in nature.

Although kneeling is no longer a practical strategy, there are many different avenues athletes can take if they wish to advance their cause and make a difference. Due to the widespread exposure of the issue, there are many influential supporters of BLM who can easily spark discussions and alleviate the soaring tension. By starting donation funds for victim’s families to hosting panels to bring police officers closer to their communities, there are countless examples of passive mediums that can be pursued to lower the frequency of unjustified police shootings.

Proponents of maintaining kneeling in every NFL game may argue that asking athletes to not kneel equates to taking a stance against their movement and the constitution as a whole.  However, kneeling as a whole is not effective anymore, and requesting athletes to stand is in the best interest of BLM and those who have been affected by or are protesting discrimination and injustice. By continuing to kneel, athletes are cultivating a debate that is fueled by anger, not one fueled by determination to regulate the severe issue.

Writer Paulo Coelho once famously said, “The world is changed by your example, not your opinion.” Racial disparity and discrimination will not be solved with an awareness movement, because protesting by kneeling has lost its novelty and is now ineffective. Instead, individuals and organizations who use kneeling to garner attention should instead take action and meet with people who can influence notable change in our country.