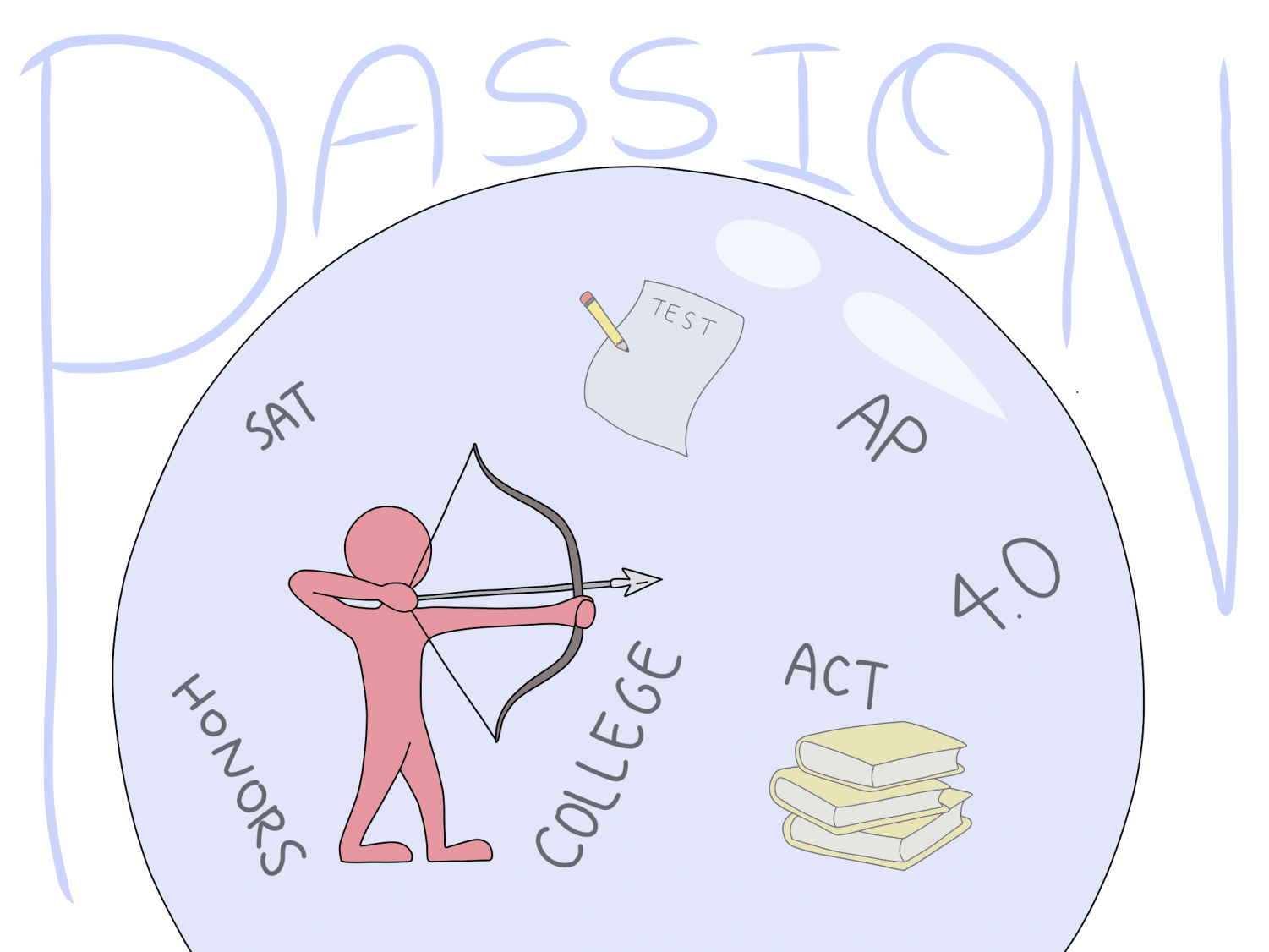 If you live in Irvine, you are probably well aware of what it generally means to be a student at Portola High. When you think of Irvine student culture, your mind may automatically resort to behaviors like adhering to incredibly high academic standards, obsessively comparing GPAs and subjecting yourself to overwhelming competition that has long characterized Irvine’s reputation.

Over the years, this culture hasn’t budged — not even during a global pandemic.

As students, we urge now more than ever for our peers, our parents and our teachers to make efforts to consciously change the culture in our community in a more empathetic light than what we have been known for in the past.

According to the C.S. Mott Children’s Hospital National Poll on Children’s Health at Michigan Medicine, 46% of parents have seen their teen show signs of new or worsening mental health conditions since the beginning of the pandemic.

“I feel like I need to get a decent GPA and good grades on standardized testing and good extracurriculars because the standard bar is set really high,” sophomore Christopher Li said. “So in order to make yourself stand out, it’s really hard to do so with only a good GPA.”

With everyone aiming for the same goal, students constantly compare themselves with fellow students and define their worth and value solely based on GPAs and standardized test scores. Parent Elise Aoki knows the culture intimately with three of her children currently in college and one a Portola High student.

“I kind of felt like living in Irvine, we are somewhat at a disadvantage because as parents we all chose to come to Irvine because we were so comfortable with the quality of education, and we thought that it would be helpful to our kids,” Aoki said. “What we didn’t realize was how competitive it is, and coming from a district like this it’s even more competitive, and their stress level becomes, to me, one of my biggest concerns.”

The mindset forming this “Irvine bubble” stems from an idea that has been ingrained into students’ minds: that acceptance into a prestigious college is the one and only path to happiness.

In theory, this culture could potentially encourage productivity; however, the damaging effects on students’ mental health far outweigh the stimulation of motivation.

“It really is a holistic process when we review what the student is passionate about and what they enjoy learning about or what they enjoy and challenge themselves with,” current admissions reader for University of California, Irvine and counselor Ryan Itchon said. “So even if it’s just two or three courses that they want to spend extra time on, along with activities that they enjoy, whether or not it’s related to their potential career, I think that goes a much longer way than a student who is maxed out who has had to drop one or two AP courses because they overloaded themselves.”

The competitive culture normalizes choosing “more rigorous” courses that would please college admission officers. This mindset limits students from utilizing high school as a way of exploring interests and building upon them.

“We have a CP Psych and an AP Psych, and while both are popular, the AP Psych is ridiculously popular to the point where we’ve even had years where we had to turn people away because we didn’t have the teachers to teach all those sections,” social studies department chair Jon Resendez said. “It would be, if we allowed it to every year, it would be maybe the biggest course in the entire department. But that’s not true of CP Psychology. So what’s the deal with that? Right? It’s not just interest in psych. It’s interest in AP.”

Problems stemming from this competitive culture also leave students unprepared for the future, such as when they try to find their interests during their college years. When students are excessively occupied or dependent on grades and test scores during high school, they lose the opportunity to explore and build upon their high school experiences that ultimately guide an understanding of what they want to accomplish later in college.

In fact, according to an NPR article, “Poll: Prestigious Colleges Won’t Make You Happier In Life Or Work,” a Gallup poll supported that there was no link proven between expensive private colleges and salary for graduates, but rather the income of these individuals were “much more closely tied to a person’s choice of a major.”

However, when students struggle to develop their interests in high school, it is difficult for them to choose majors they would enjoy.

A study conducted by Ellucian, a provider of software and services built to power higher education, stated 51% of students are not confident in their career path when they enroll in college and two-thirds of students feel overwhelmed by the process of selecting a major. In addition, 30% of students in two-and four-year programs end up changing their majors, according to the U.S. Department of Education, even despite the ramifications involved in the process of changing a major including greater time-commitment, delayed graduation and increased costs.

In order to combat the dominant college-focused culture within high schools, “The Campanile,” the newspaper of Palo Alto High School, took initiative to address such issues at their school by ending its annual tradition of displaying a college map two years ago.

Their efforts to root out the school’s toxic, comparison-driven culture not only acknowledged that such culture erodes one’s sense of value, but also emphasizes the importance of students initiating action to create change.

“Attending the college that fits you best should push you to discover all the opportunities and pathways you can take with a college degree and education,” alumnus and University of California, Santa Barbara freshman Anthony Lu said. “Grad requirements in high school are relatively basic and give you a good general understanding of the world, but it’s largely focused on history and math. I am still getting used to being comfortable with branching out into other subjects of interest that I wasn’t able to explore in high school.”

The problem embedded in society is not one shortly rooted. According to the review site Niche, IUSD has been ranked in the top 20 districts within California. As members of a highly-ranked educational district, the problem will never subside without the collective reevaluation of individuals in the community.

Although many individuals are concerned that the change in culture will downgrade our status as a high-achieving district, when students take less AP courses, they would be able to have more time to distribute their attention to interest-oriented courses. This would also allow students to maintain higher GPAs as they would have a less overwhelming course load.

“Colleges want to know who you are,” principal John Pehrson said. “So if you can take a couple of things and really show how you’ve demonstrated passion in those things. That’s a lot more attractive than just having seven APs on your record.”

For many community members, the pandemic has offered one tool we can all utilize: more time by ourselves. Instead of viewing this time as an opportunity to advance in getting ahead of others, students, parents and faculty can use this opportunity to reflect on values they currently hold and actions they can take to contribute to a collective shift in school culture.

For students, focus on using high school as a pathway to explore and develop interests rather than as a battleground of competition to appear a “stronger” student than your peers, and remember everyone is meant to follow different paths at different paces. Dream of future goals beyond college and a life that makes you excited, while understanding that the rank of the college you are accepted to does not define your life’s value.

For parents, understand that students are already surrounded by peers who set impossibly high expectations for themselves and that competition culture can take a toll on their mental health. Instead of fixating on achievements, focus on providing emotional support and encouraging learning experiences that assist students in developing holistically so that they are prepared for life beyond college.

For faculty, continue to support students with more opportunities to engage in different fields and work to create an environment allowing students to distribute their time equally among their interests. Further promote the mentality Portola High was founded on: as a place of exploration and growth rather than achievement alone.

We know that it is easy to simply conform to the mindset that we have gotten all too familiar with. But, we will never be able to change our way of thinking unless we collectively redirect the conversation to redefine what it means to be a student in Irvine.