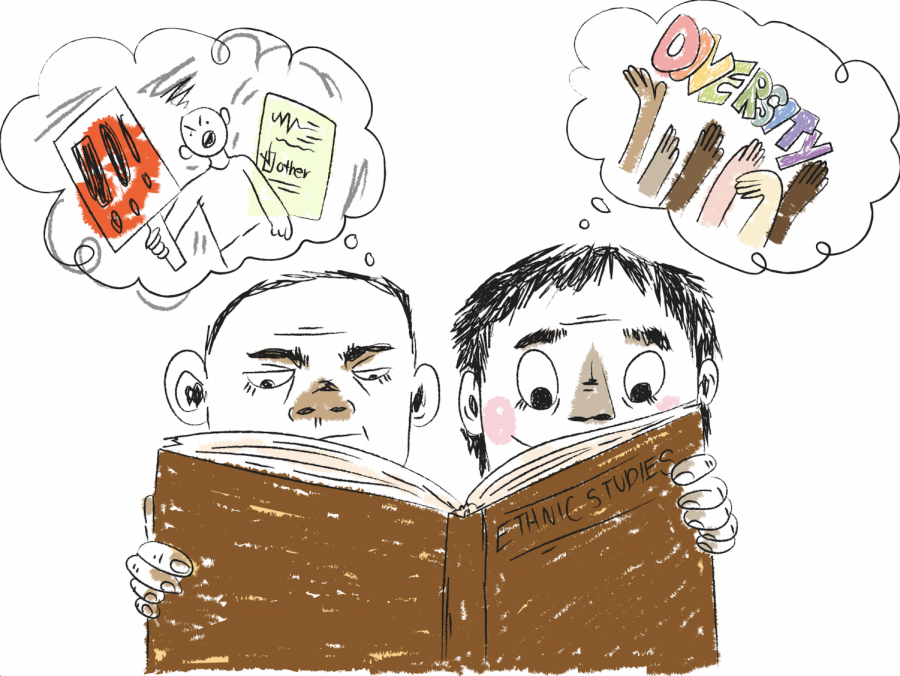 Should Ethnic Studies Be a Graduation Requirement in High Schools?

The Price of Promoting Diversity

Assemblyman Jose Medina proposed Assembly Bill 331 requiring all students in California high schools to take ethnic studies for a year. However, this bill has been delayed due to a rise in controversy regarding various reasons.

With a set career path in mind, many students at Portola High have already overwhelmed their schedules with courses focusing on their specific interests. Establishing ethnic studies as a graduation requirement only burdens them with a class that students just may not be passionate about.

While it is important that students learn to acknowledge and embrace different cultures, requiring students to take ethnic studies poses conflicts for not only Portola’s student population, but also has the potential to cause issues for representation in schools.

“It can become stereotypical, it can exacerbate divides between people, people that are concerned about microaggressions or aggression-aggressions,” social studies department chair Jon Resendez said. “When it comes to ethnicity and diversity, it could make it worse if it’s not done right, which is why I’ve tried to do my part working with the state board of education to at least send my ideas forward about how that class would be structured at this level.”

It can become stereotypical, it can exacerbate divides between people, people that are concerned about microaggressions or aggression-aggressions.”

“After California released the draft of the materials for public comment in June, some Jewish legislators and organizations complained that anti-Semitism was not an area of emphasis,” New York Times writer Dana Goldstein said. “Armenian, Greek, Hindu and Korean organizations later joined the Jewish groups in calling for revisions.”

Dedicating classes to learning about a certain ethnicity, specifically those of minority, could cause backlash among other cultures who are striving for more representation in education.

On top of these ongoing arguments, finding teachers to effectively educate students on the historical events regarding one culture poses an even more difficult task. According to the New York Times, more than three-quarters of California students are nonwhite, but 62 percent of their teachers are white. With each culture holding a complex past, teachers in each school district may not even be ready to productively teach this type of curriculum to students.

Establishing ethnic studies as a required course is accompanied with several issues that must be resolved before this systematic change becomes a reality. Instead of rushing this process, the social studies department at Portola High should strive to distribute cultural education within language or even social science courses that are already required at school such as AP Human Geography and Modern World History.

Claudia Lin is your co-editor-in-chief for her third year on the Pilot. She is looking forward to making as many memories as possible for her last year...

A Price Worth Paying

While many of Portola’s social studies courses already incorporate components of ethnic studies into their curricula, more than just the occasional reference is necessary for students to gain a deeper understanding of other cultures. By making a course dedicated to ethnic studies a graduation requirement, California schools can avoid a shallow or inaccurate representation of other cultures while promoting inclusivity and giving students the freedom to pursue their interests.

“The more that you know about a specific group or culture, the more you’re exposed to them, the more that you learn about their backgrounds, it makes you a better person,” social studies teacher Shameemah Motala said. “It makes you more diverse in your knowledge. It also makes you able to empathize more and see the world from different perspectives rather than your own community and your own upbringing.”

Right now, we’re learning about world wars, but that isn’t enough to go more in depth about certain countries.”

Rarely do world and American history courses devote more than a few weeks to learning about ethnic minorities; many groups are mentioned only briefly if at all. Students cannot expect to gain a deeper understanding of different cultures if courses do not offer enough content within their curricula. Adequate time is necessary for students to form connections with the topic they are learning about.

“Right now, we’re learning about world wars, but that isn’t enough to go more in depth about certain countries. It’s just very brief,” freshman Janice Kim said. “Any ethnic studies in general that focuses on a country and dives deeper into what their perspective was on topics such as the world war would be appealing and generally more interesting to students.”

Critics point out that deciding which cultures are represented in an ethnic studies course can create more problems than it solves. And while it is true that similar programs have caused controversy in the past, designing a student-driven curriculum will ultimately cater more to student interest than any textbook-centered class.

A course that encourages the exploration of different ethnicities will allow students to do more independent research on a culture they are passionate about, examine a variety of sources and case studies, and draw more holistic and accurate conclusions. It will provide them with the opportunity to recognize multiple perspectives on a culture, instead of whatever position adheres to the laundry list of state standards in general social studies curricula.

Implementing a mandatory ethnic studies course in California schools will send a message to communities about the importance of staying culturally informed. A course like this one would effectively educate students on diversity, which is the first step in creating a more inclusive society.

Lauren Hsu is your Opinion Editor and Co-Social Media Manager for her third and final year on the Pilot staff. She is looking forward to making even more...