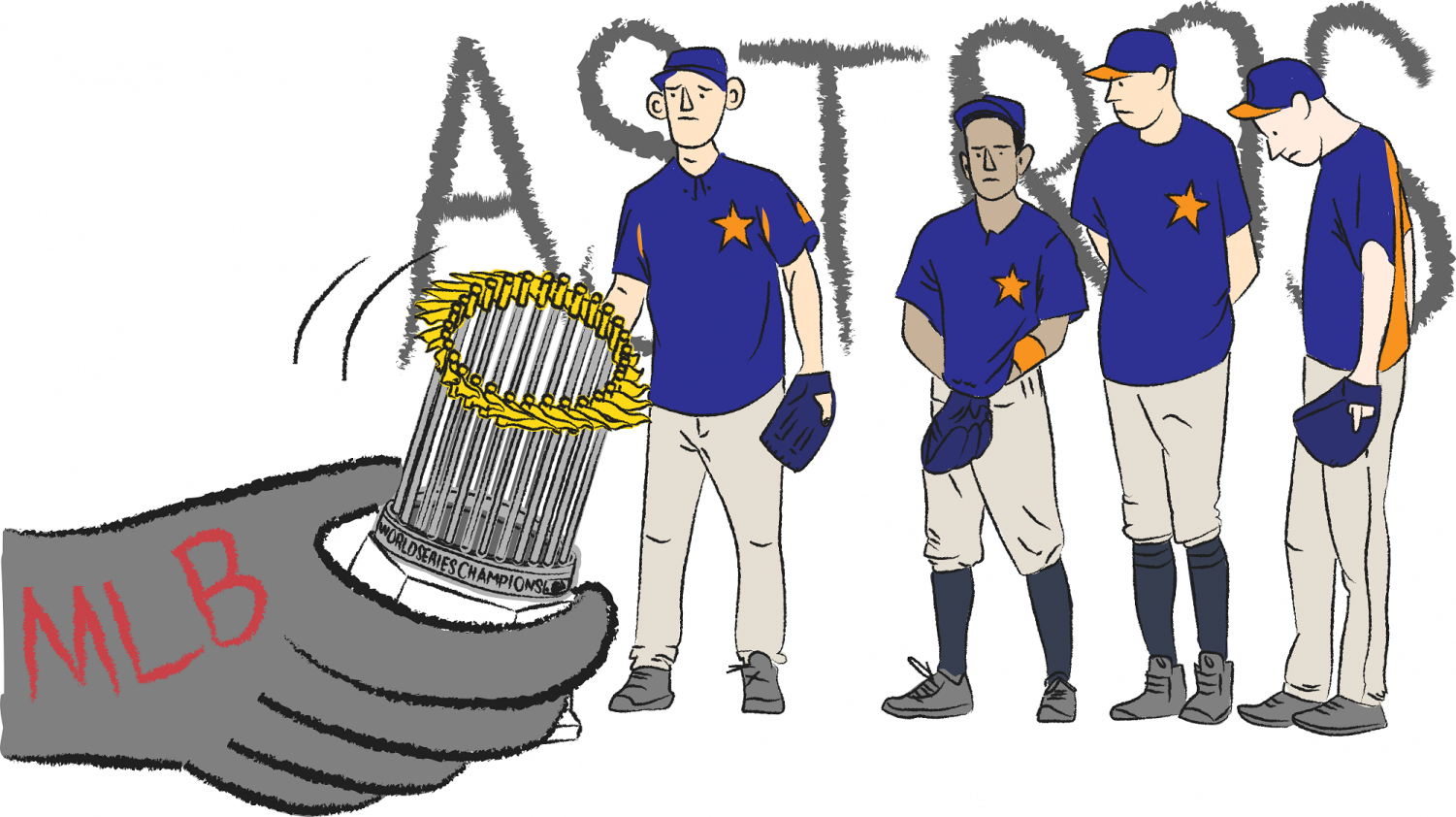 Should the Houston Astros Be Stripped of the World Series Title?

An Asterisk for the Astros

Baseball fans around the world are outraged by the electronic sign-stealing scandal perpetrated by 2017 World Series Champions, the Houston Astros. Because the Astros clearly broke the rules by continuously using hidden cameras in the outfield to cut corners in the game, their World Series title must be removed.

Sign stealing is when players manually attempt to decode the signs that the opposing team’s catcher uses to communicate to the pitcher which type of pitch should be thrown next. Oftentimes, knowing what each gesture signifies gives the batter a higher advantage over the pitcher since they can easily predict how to attack the upcoming pitch.

While sign stealing is a long-standing practice in baseball history according to the Washington Post, the Major League Baseball (MLB) rulebook states that “stealing signs using camera, binoculars or other foreign objects to the game is illegal.”

Following the confession of this scandal by former Astros pitcher Mike Fiers, the MLB took charge. The consequences involved firing Astros managers A.J. Hinch and Jeff Luhnow. The MLB also stripped the Astros of first and second round selections in the 2020 and 2021 drafts and charged the Astros franchise $5 million.

While these punishments inflicted damage on the Astros franchise, one thing is evident: the Astros cheated their way to the top repeatedly, so they must be stripped of their World Series title.

The Astros strikeout rate decreased dramatically from 2016 to 2017 when non-pitchers struck out in 23.4 percent of their plate appearances in comparison to 17.2 percent in 2017 according to MLB statistics. When looking at these statistics, it is important to note that the Astros’ use of hidden cameras to record signs occurred repeatedly.

The concept is fairly simple; the World Series title rewards the best performing team in the MLB. Since the Astros continuously used illegal practices to build success, the team is not deserving of such a prestigious title.

This is similar to a situation dating back to the 2000 Summer Olympics, when cyclist Lance Armstrong was stripped of seven of his Tour de France titles by the International Cycling Union upon the discovery that he was guilty of doping. This scenario provides enough of a historical precedent to indicate that those who use cheating as a method to achieve success are undeserving of any awards or titles that come with it.

“It doesn’t take a philosopher to know that if you cheat to win, you’re not really a winner,” CEO of the U.S. Anti-Doping Agency Travis Tygart said.

Failure to strip the Astros of their title as a punishment for their actions could perpetuate a culture of cheating, especially for young athletes. Taking away the World Series title would ultimately send an official message demonstrating to all generations of baseball fans that cheating on any level will never be tolerated. 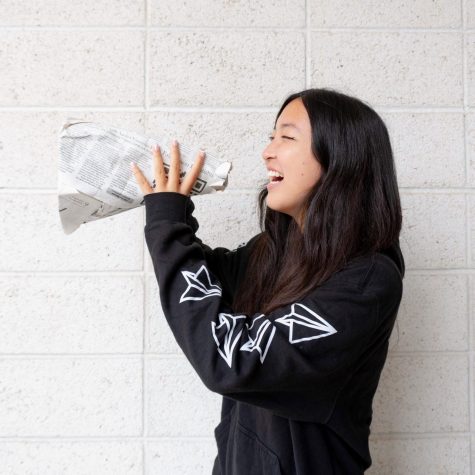 Claudia Lin is your co-editor-in-chief for her third year on the Pilot. She is looking forward to making as many memories as possible for her last year...

Astros Have Already Struck Out

The baseball world was hit with a major, yet unsurprising story in November 2019 when former Houston Astros pitcher Mike Fiers told “The Athletic” about how the Astros used technology to film and steal signs electronically, giving their batters advantages against pitchers and clearly breaking the guidelines stated in the Major League Baseball (MLB) rulebook. With the details of the controversy settled and the extensive, record-breaking punishment laid down by MLB commissioner Rob Manfred, no further repercussions are needed for the Astros.

Sign stealing has become a staple of the game, a strategic way for players and managers to figure out what pitch is being communicated between the pitcher and the catcher in order to give the batter an advantage. However, this takes a turn when the signs are being stolen through the utilization of technology, something that is explicitly not allowed according to the MLB’s rulebook.

Controversies regarding technology used in stealing signs began in 2017 when the MLB reprimanded and punished the Boston Red Sox for using Apple Watches to steal and record signs. While the MLB fined the Red Sox an undisclosed amount and warned teams to not engage in similar action, the Astros still clearly violated these rules.

In stark contrast to the Red Sox, the actions taken against the Astros included the year-long suspension of their managers, a $5 million fine (the maximum amount allowed) and forfeiture of their top draft picks in the upcoming two years. These penalties not only provide a strong blow against the team but also serve as sufficient warning against future actions.

With more issues emerging regarding the Red Sox and their 2018 World Series pennant, there have been a lot of calls for more considerable action including titles of both the Astros and Red Sox being taken away. While the investigation into the Red Sox is ongoing and will conclude within the upcoming weeks, giving the title to the Los Angeles Dodgers, who fell short in the World Series against both teams is taking a leap in the power of the MLB and its commissioner.

Stripping the title is an unprecedented punishment in any of the major American sports leagues and can serve as a large detriment to not only the history of the MLB, but also the validity of the league. Regardless as to whether cheating may or may not have played a role or been the deciding factor within the Astros win, it happened and they won.

It is up to the fans to understand that until the MLB takes more definitive actions to prevent similar scandals from occurring in the future, including potentially restricting technology around the game, we must simply remember that the Astros will forever have the 2017 title marred by the question of whether cheating was the only reason they emerged victorious. 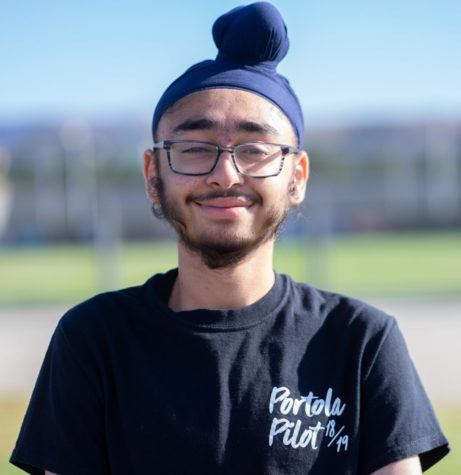 Simrat Singh is one of your 2019-2020 Co-Editors-In-Chief, for his third and final year in the Pilot! As Co-Editor-In-Chief, Simrat is ready to leave a...