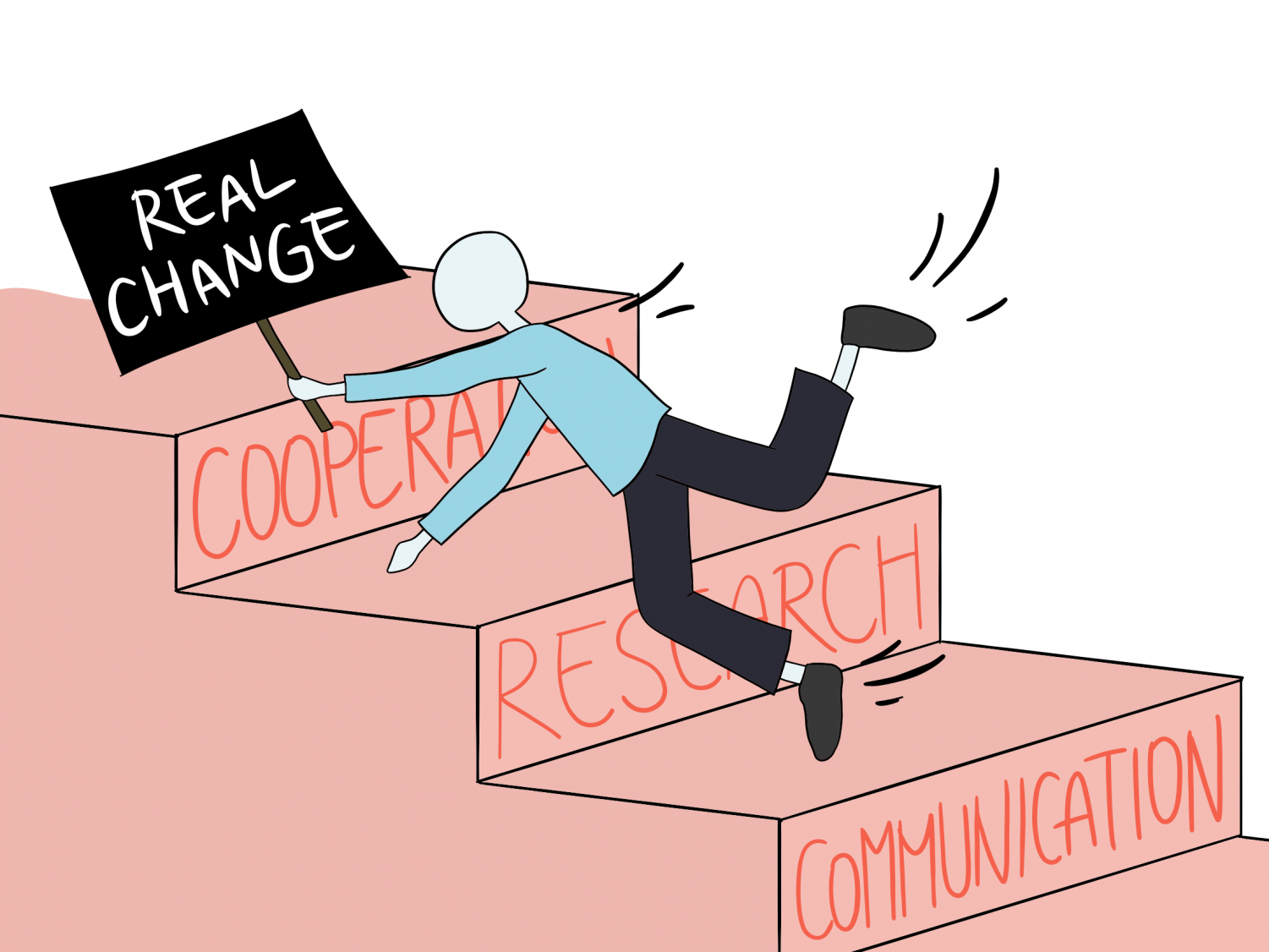 Activism is a marathon; make sure to watch your step. (Jaein Kim)

Activism is a marathon; make sure to watch your step.

From student walkouts over gun safety to protests advocating for racial justice in schools, students have long used activism to confront flaws within academic institutions.

According to the Educational Advisory Board, a research-based educational practices firm, student activism-related activity spiked in 2020 with over 500 pieces of data related to protests, petitions and demands surfacing in school environments. However, such advocacy is often unsuccessful due to inadequate preparation and disorganized leadership.

In order for student-led activism to make meaningful change, students must practice consistent civic engagement and adopt a well-researched and cohesive approach. Their planning must include communication with those in power, a focus on an accurate and comprehensive understanding of the situation and the coordination of devoted individuals.

The Irvine Unified School District learning model system has sparked debate over whether schooling should remain in the hybrid model, with part-time in-person learning, switch to an entirely virtual platform or revert back to traditional instruction.

Amid a post-winter break COVID-19 surge, the district opened applications for learning model transfers and administered a temporary “otherwise present” attendance code, or “O-code,” that allowed students to attend hybrid school through Zoom on their in-person days without being marked absent. However, hybrid education continued to face opposition, especially from student-led groups such as the IUSD Student Strike.

Juniors Michelle Choi, Arun Malani, Christopher Stocks and Anne Wu organized the IUSD Student Strike to voice student health and education quality concerns. While the strike was scheduled for Jan. 26–29 — as announced on their Instagram page (@iusdstudentstrike) —  it was informally cancelled, though students were still encouraged to participate, according to Stocks.

“We did receive backlash from admin and some teachers, which is why we’ve heard a lot of people say [the strike] wasn’t successful, but in my opinion, I think it was actually very successful because it helps us spread the word, regardless of whether people participated or not,” Wu said. “A strike is more for weight; it’s to put pressure on the district.”

Though the plans for the strike were withdrawn, the organizers still started petitions, emailed IUSD officials and raised awareness for their cause via social media. However, these efforts were ultimately futile, as the “O-code” expired on Jan. 31 and hybrid learning continued as intended.

I knew something was coming, but other than that, there was no communication.””

Unfortunately, this pattern of events is all too common — an earlier IUSD student-led protest surrounding the return to school called the IUSD Student Coalition also emerged as @iusdstudentcoalition on Instagram in December 2020. However, both groups’ efforts quickly dissipated, as the IUSD Board of Education was not officially made aware of student initiatives to alter hybrid learning, according to IUSD board member Sharon Wallin.

“I knew something was coming, but other than that, there was no communication,” Wallin said. “When you’re talking to one board member, that one board member is speaking only for himself or herself, not for the whole board.”

From here, the question arises: what are the steps needed to ensure student voices are heard? The answer lies in the quantity and quality of research regarding advocates’ goals as well as the procedures necessary to achieve them conducted before seeking out public support.

Designating substantial time for preparation enables a thorough understanding of the problem, which allows activists to better communicate with their audience and address their opposition.

Using these strategies, student advocates have been successful in implementing local change. In 2015, student-led efforts by the California Association of Student Councils led to the approval of AB 1204, a law establishing a formal student member on the Instructional Quality Commission, after concerns that student voices were not properly considered in the development of educational materials like textbooks.

“You have to promote activism in a way that doesn’t make the district seem like an enemy because then they’re not going to want to cooperate with you,” CASC outreach committee member and sophomore Ellie Lian said. “You should definitely modify how you advocate for certain things based on either the demographics or the people you want to make changes.”

You have to promote activism in a way that doesn’t make the district seem like an enemy because then they’re not going to want to cooperate with you.””

However, successful activism relies on more than effective planning: the amount of support a movement garners correlates with its impact. Unity among student activists is essential as it strengthens individual ties to a cause and prevents burnout. Students often lack an established support system as well as prior experience in activism, so a wide network of informed peers is essential.

The prerequisites of effective activism apply not only to students, but also to other members of a community who advocate for a cause.

Following a surge in protests from proponents of Black Lives Matter in June 2020, social studies teachers Virginia Nguyen and Jon Resendez and Cadence Park teacher Stacy Yung convinced IUSD to adopt Resolution No. 19-20-48, which established a districtwide academic commitment to anti-racism and diversity in representation.

“You have to find the research and the time to make sure that what you believe in is right,” Nguyen said. “I don’t want to push my district into doing something and committing to something that could be wrong.”

While the collective advocacy of youth is powerful, there are foundational steps that must be taken to inspire true change in the community.

“Community activism is essential. That’s part of our democracy, and I think that there’s nothing wrong with it,” Wallin said. “You may not get the answer you want, but for me to hear what you have to say about it becomes essentially important.”

If activists dedicate the time and effort to prepare a strong leadership team and realistic action plan for their cause, they can improve the world, one student at a time.