Trump failed to publicly denounce the rioters until 4 p.m., nearly two hours after the violence had begun. In a video posted to his Twitter account and later deleted by Twitter, he falsely told the rioters, “We had an election that was stolen from us. It was a landslide election and everyone knows it, especially the other side. But you have to go home now.”

“We can’t allow him to remain in office, it’s a matter of preserving our Republic and we need to fulfill our oath,” Democrat and Minnesota Rep. Ilhan Omar tweeted on Jan. 6, promising to draw up articles of impeachment.

On Jan. 7, the Wall Street Journal editorial board urged Trump to resign in a piece titled “Donald Trump’s Final Days,” deeming his actions “an assault on the constitutional process of transferring power after an election.” That same day, Pelosi called for Trump to resign immediately and declared the intent to impeach otherwise.

Meanwhile, Trump’s advisers reported that the president remained “consumed with anger toward Vice President Mike Pence over what he saw as a betrayal for refusing to try to block the congressional certification of President-elect Joe Biden’s election victory,” according to the Wall Street Journal.

In the aftermath of the riot, Twitter permanently suspended Trump from its platform, claiming that his Tweets incited violence. 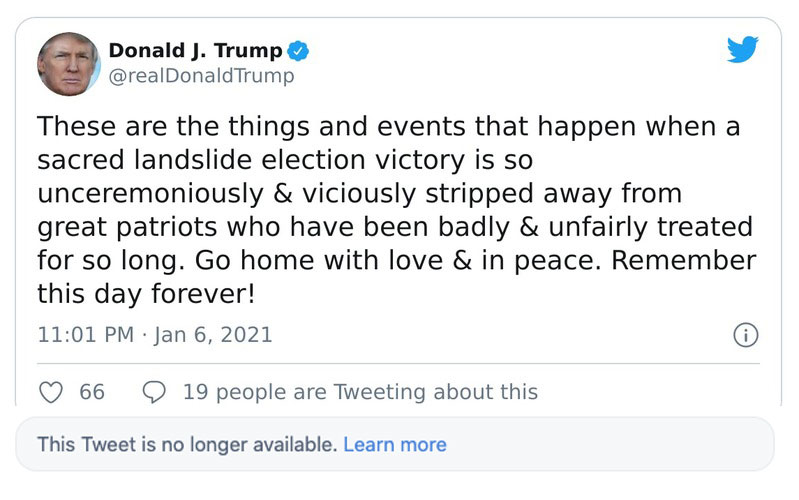 Gallery|3 Photos
Screenshots Courtesy of Factbase Trump Twitter Archive
Though social media giants Twitter and Facebook both banned Trump from their platforms in an effort to prevent further incitement of violence in the aftermath of the riots, their actions have drawn criticism for possibly being an infringement of freedom of speech.

“These Tweets must be read in the context of broader events in the country and the ways in which the President’s statements can be mobilized by different audiences, including to incite violence,” Twitter wrote in a public statement on Jan 8. “As such, our determination is that the two Tweets above are likely to inspire others to replicate the violent acts that took place on January 6, 2021.”

Other platforms, including Facebook/Instagram, YouTube, Snapchat and Reddit suspended Trump’s accounts in the following days, according to the New York Times.

If you want a picture to show with your comment, go get a gravatar.